Acupuncture: Does it hurt? 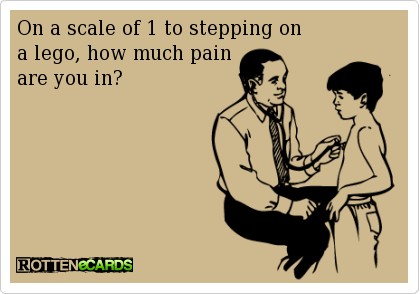 I get asked this question a lot by curious friends and nervous patients. Does acupuncture hurt? Whenever people think of needles, they think of pain. Most people are surprised, and relieved, to learn that acupuncture doesn’t hurt. Most of the time, patients don’t even feel the needle go through the skin. It shouldn’t cause pain, although there is certainly a “needle sensation” described as a discomfort, with different sensations like tingling, numbness, warmth, swelling, or maybe even something close to soreness, but not actual pain. The reason acupuncture needles do not generally cause pain is that:

You do want to have some sensation though, and in Chinese Medicine this is eloquently referred to as a phenomenon called “de qi”, which translates to “The Qi has arrived”. Qi is the life force, the energy that drives everything and is in everything. Acupuncture aims to influence the different types of Qi in the body, perhaps by unblocking it, or directing it to different areas, or increasing it.

Why is de qi important? The prevailing theory is that de qi, or needle sensation, is essential for acupuncture to work. (Though Japanese acupuncture is an adaptation of acupuncture using very smooth needles that do not cause any needle sensation… and many people believe this still works). De qi is believed to be caused by tiny muscle fibres wrapping around the needle when the acupuncturist (gently) manipulates the needle. (Interestingly, acupuncturists can feel de qi as well – it is classically described as the “fish biting on the fishing line”. I’ve felt it at the same time as the patient reports they get the needle sensation. It’s fascinating).

When we sense de qi our nerves do too – specifically, tiny nerves that carry pain signals. These then transmit signals to our spinal cord and different areas in our brain that then will stimulate the release of a cascade of happy chemicals that cause the acupuncture effect. A pleasant cocktail of serotonin, endorphins and other nommy neurotransmitters that can relieve pain, increase well-being, reduce blood pressure, improve sleep… No wonder so many of my patients enjoy that post-acupuncture buzz so much! Hmm…

In a very unscientific “study”, I have estimated that the number of people I have treated who complained of pain on needle insertion has been four out of hundreds and hundreds (yes, very rigorous science there I agree…) that I have treated. Usually this is because the acupuncture needle has gone into a little hair follicle, or burst a tiny capillary. Removing the needle or adjusting the position of the needle usually fixes the problem.

I hope that has convinced you, please feel free to share with anyone you think would benefit from acupuncture :)

Like Loading...
Author: admin
Filed Under: Acupuncture and Chinese Medicine
Acupuncture for breech babies
My presentation as an Early Career Researcher at the Women In Medical Research Colloquium, University of Melbourne 2012

1 thought on “Acupuncture: Does it hurt?”